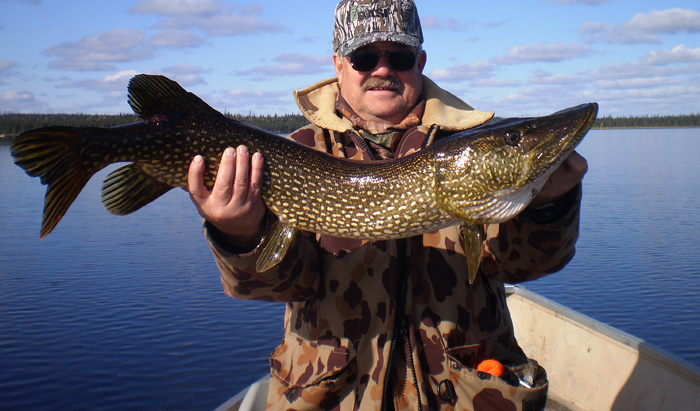 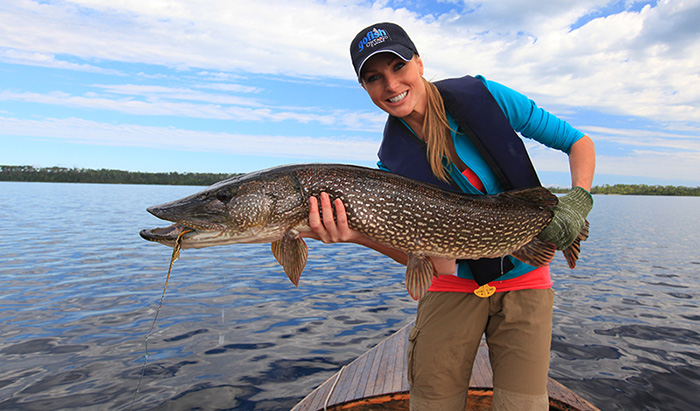 The lakes north of Nakina have always been well known for producing good numbers of Northern Pike as well as trophies.

Of all of the top-producing pike lakes in the area Brace Lake is the best and consistently produces trophy Pike. These toothy critters often tear apart bait, lines, and put extreme strain on some of the best rods and reels, but when you land one it's a memory that you will not forget!

This is not a lake where you might catch a trophy northern. It's a lake where you will catch a Trophy Northern. Each season, our guests landed-&-released an upwards total of 200 Northerns over 40 inches. Over the past several years almost every guest has caught at least one Northern over 40 inches with many Monster Northern Pike up to 50 inches. There are so many guests that concentrate on the unbelievable non-stop Walleye action that the true potential of the Pike fishery is still not known. The really enjoyable aspect of Brace Lake is it's not a gigantic lake where you have to travel miles and miles to find the best fishing spots. There are hundreds of hotspots close to the lodge that keep most guests happy for the whole week. We do encourage guests to explore other areas of the lake.

Another reason why there is a high population of trophy Pike is conservation. Brace Lake Outfitters has always strongly encouraged catch-&-release. Now in modern times conservation is practiced by just about everybody and every year the fishing gets better and better with more Trophy Pike being released each year.

Not all Northern Pike caught on the lake are trophies. Many of our guests really love fresh Pike for shore-lunch. If you are a connoisseur of Pike then you will be happy to know that you can still catch lots of smaller good-eating size Pike. Pike are most common in the 2 to 6-pound range and when fresh taste just as good as Walleye. If you specifically target Northern Pike you should be able to catch 30 to 60 in a day with a couple in the 7 to 10-pound range. Throughout the week you should catch a couple in the 40-inch range and a few lucky guests will catch Monster Northerns pushing 50 inches. If you really enjoy Northern Pike fishing then Brace Lake is the fishing-trip vacation destination for you.